The new Bond Street and other stories

Although the Elizabeth Line has been open for some months, Bond Street station didn't open until today.  And while we were on holiday, the new link between the DLR and the Northern Line at Bank opened, as did Battersea Power Station (which every Jodi Taylor fan knows is the Time Police HQ) and, I believe, a knew entrance to Knightsbridge station.

We do plan to go to Battersea Power Station very soon - it's a direct bus ride from here - but today was about the first two of these.  We started off by getting a bus to King's College Hospital where a friend is currently incarcerated after a fall.  After visiting her, we took another bus up to Elephant and Castle, and caught the Northern Line (neither of us has used this station before, as far as we are aware) to Bank, where we eventually found the rather shiny new escalators down to the DLR.  As we wanted to go on the Elizabeth Line, we took the DLR as far as Canary Wharf, and enjoyed seeing the Elizabeth Line station there, which apparently has roof gardens, which I decided not to bother visiting.

The Elizabeth Line duly took us to Bond Street, where we admired the huge new station, 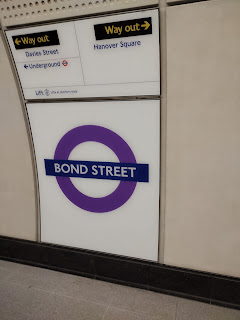 and then came out and had a snack in Prets.  I had their Chocolate Moose (sic) which I don't think I've had for nearly 20 years and every bit as delicious as I remember it!  And then just a short walk to Oxford Circus, where we got a Victoria Line train home.  At least, I did a bit of shopping, and the Swan Whisperer went off to do something else.  And so home.
Posted by Mrs Redboots (Annabel Smyth) at 21:06 No comments:

So we are home.  We got up at sparrowfart this morning and were ready to leave the campsite by 09:00 - we couldn't leave before as we hadn't paid and reception doesn't open until 9.  It was only just over half an hour to Eurotunnel, so we were early and went to the service station in Cité Europe to buy us much diesel as we were allowed.  It is still a great deal cheaper than in the UK, despite price rises caused by the shortage.  Petrol, however, is dearer than here.

When we got to the check-in, they offered us a crossing half an hour earlier than our booked time.  So we accepted for 11:20, and went to the car park to wait. They called us to go through in what would have been good time for a 10:50 crossing, so we were hopeful, but then when we got to the holding area the signs said it would be 21 minutes before boarding! So we were not very impressed, as by that stage we had to have the gas off and thus the fridge off (it will run off 12 volts when the engine is running, but if it isn't it needs gas or to be plugged into electricity). Still, it gave us a chance to finish packing up the clothes and bedding, etc, so we could just sit and read during the crossing itself.

An uneventful drive to No 6, and a very nice lunch with my mother and sister (cold trout with smoked trout and quail's eggs; salad; boiled potatoes), and then we had to sort out the rest of the van - we have still succeeded in leaving behind my stock cubes and such clean clothes as I had left, and forgot that we planned to take the covers off the front seats and wash them!  Oh well, we can go down in a week or so to rescue them.

Horrible drive back to London - very heavy traffic - and then of course hard work unpacking and putting away.  All that is now done, as is the first load of washing.  Much washing.  Many loads....

No photos today, although the autumn colours were lovely. So here is a photo of the Channel which, after all, we have just been under! 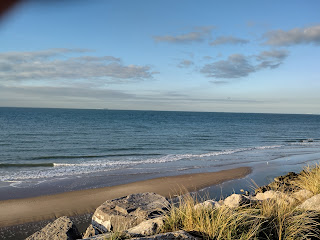 Posted by Mrs Redboots (Annabel Smyth) at 22:00 No comments:

The last full day of our holiday. We started the day in Neufchatel-en-Bray, and have ended up in a camp site in Wissant.
Our journey took us via the Hyper U in Abbeville that we had visited on our way south, and I did a rather larger Last Shop in France than I meant to, but there were yogurts on special offer and then Neufchatel-en-Bray cheese, and even a local Abbeville cheese - rude not to, really! Plus a small squash that I shall roast and stuff, possibly with an egg inside, and some pot-au-feu vegetables which I shall make beef stew with (buying the beef in Lidl at home!). And various other things...
So then we drove as far as the Aire de la Baie du Somme where we had a picnic lunch, and mourned the disappearance of the "éolienne" which used to tower above the entrance. And so here to Wissant, where we watched people playing boules while we had a cup of tea, and then went for a walk. I didn't enjoy the first part of the walk as the path which should have led to the beach was inches deep in dry sand, very hard to walk on. 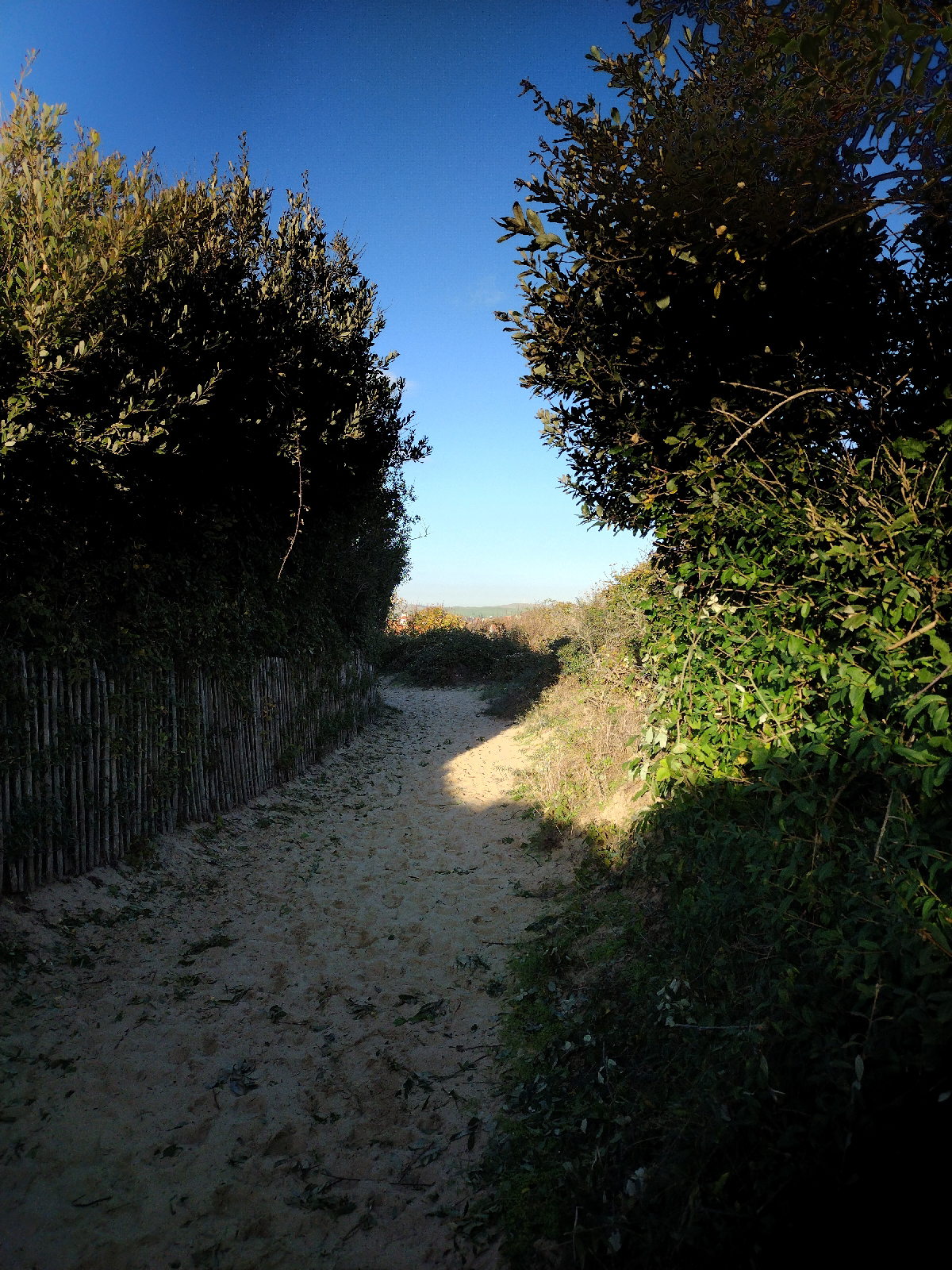 And then when we got there it was all fenced off as it was a nature reserve or something. 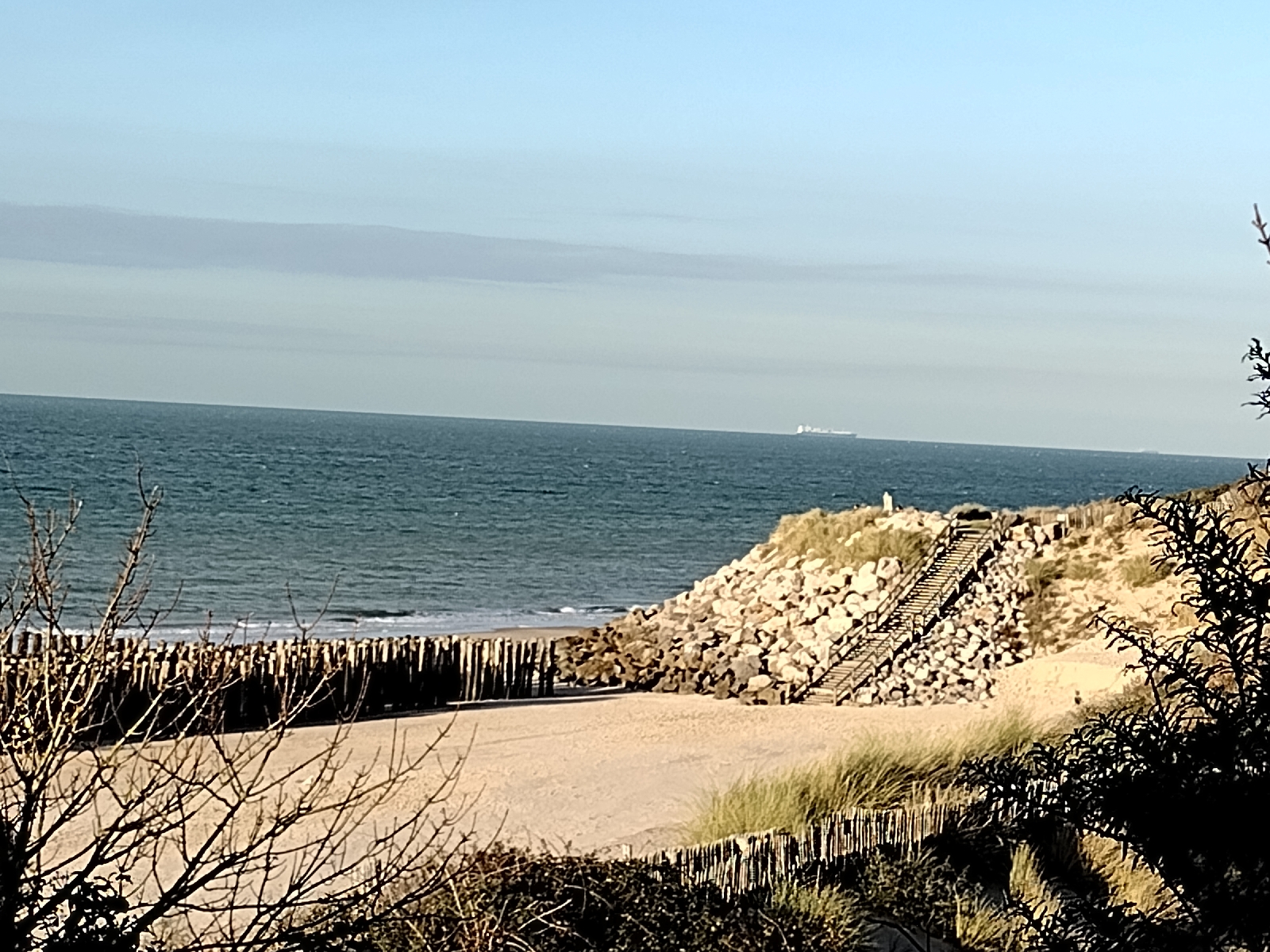 But we eventually found the promenade and were able to have a look at the sea, so that was all right!
Then back to the WoMo, and I am now cooking butternut squash and mushroom risotto. Yummy, I hope!
Posted by Mrs Redboots (Annabel Smyth) at 18:32 No comments:

There was a massive, massive thunderstorm in the night - absolutely fantastic lightning and almost continuous growls of thunder. And then it rained! How the Swan Whisperer slept through it all, I'll never know, but he really missed an amazing experience!
However, this did nothing for my sleep, so I have had a headache on and off all day. First of all I woke up again (having dozed off) when they turned the street lights back on at 6, and then some very noisy machine came and Did Things for what felt like an hour, but was probably only about 15 minutes. I don't know what it was doing, but it made a very unpleasant noise doing it.
So anyway, I didn't want to go for a walk this morning. I did, of course, go shopping at an Intermarché outside Evreux, and a short walk before lunch at the Normandy town of Vernon, where there is a mediaeval flour mill on the remains of a mediaeval bridge, 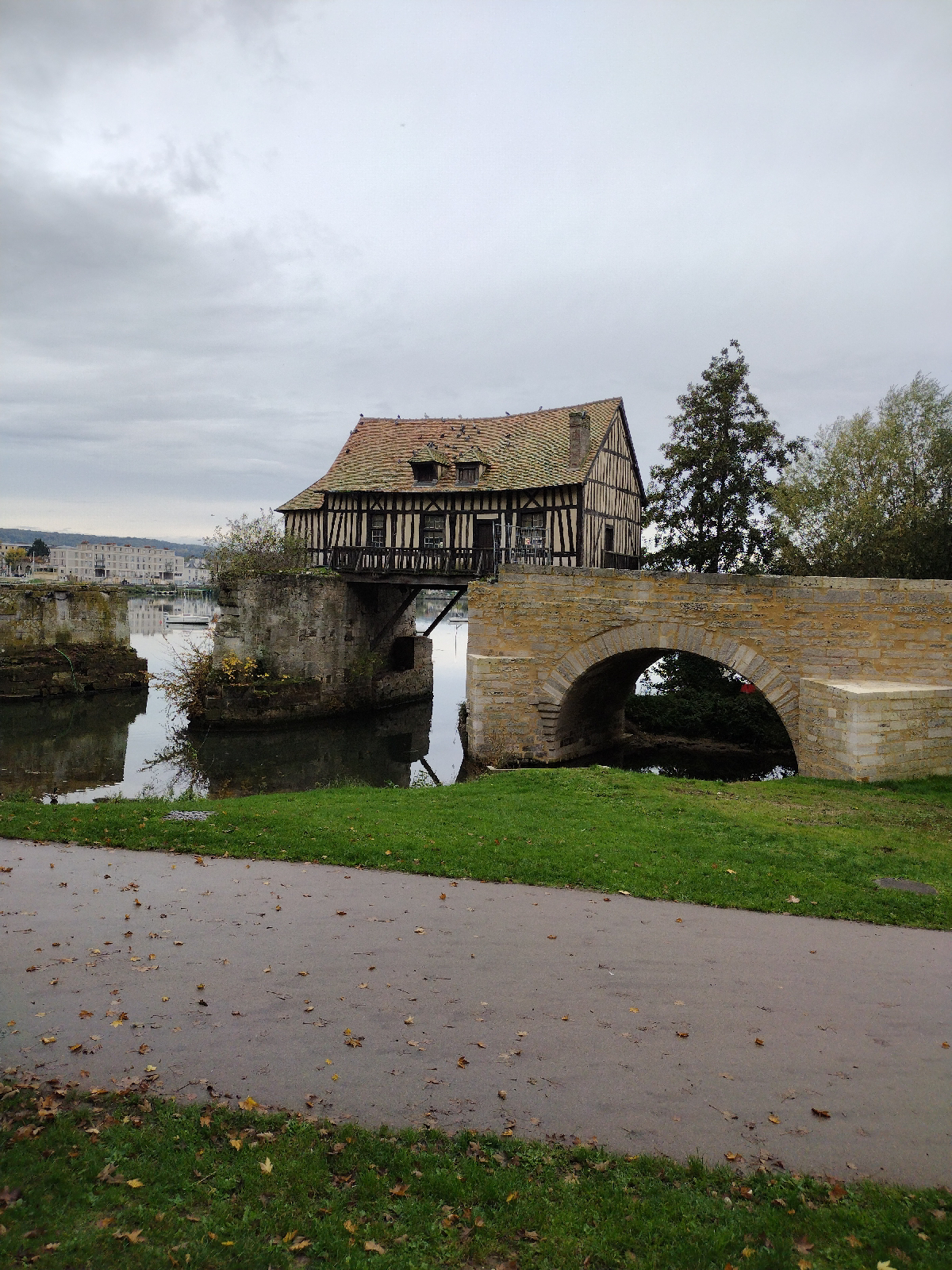 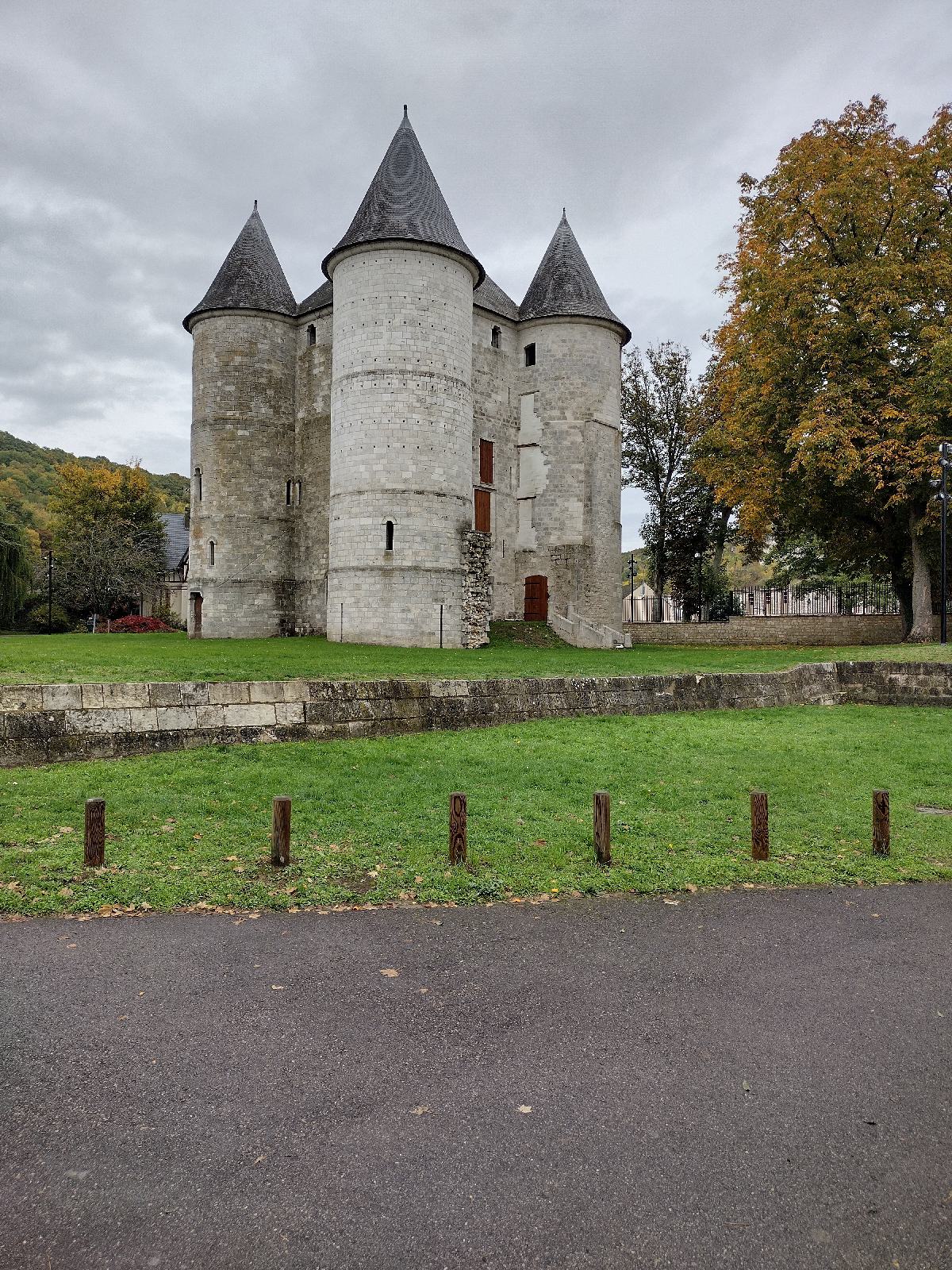 We enjoyed walking round there and reading the panels about the buildings. Also the autumn colours of the woods above the Seine.
We are parked up for the night at Neufchatel-en-Bray, in a very nice aire. Unlike last night's, it isn't free (there is, I discovered too late, a free one just a few miles east) but only about 12 euros, which is very reasonable. It even has a launderette! However, I think our laundry can wait until we get home now. We might even have finished it by the weekend!
Posted by Mrs Redboots (Annabel Smyth) at 19:03 No comments:

Today is Sunday, and because we are that much further north, it didn't really begin to get light until about 08:00. And we were not in a hurry, so didn't rush to get up. The Swan Whisperer went to find a bakery; the one round the corner from the Camping-car Park had closed down, but there was a shiny modern one not just so far away so he went there for our baguette, croissants and Sunday patisseries.
After breakfast, we went for a walk round the "Etang Communal" which was exactly 1 km; there was a woman doing laps in the other direction who we kept meeting, as she was walking rather faster than we were, with the aid of trekking poles! We wondered how many laps she had done/was doing. 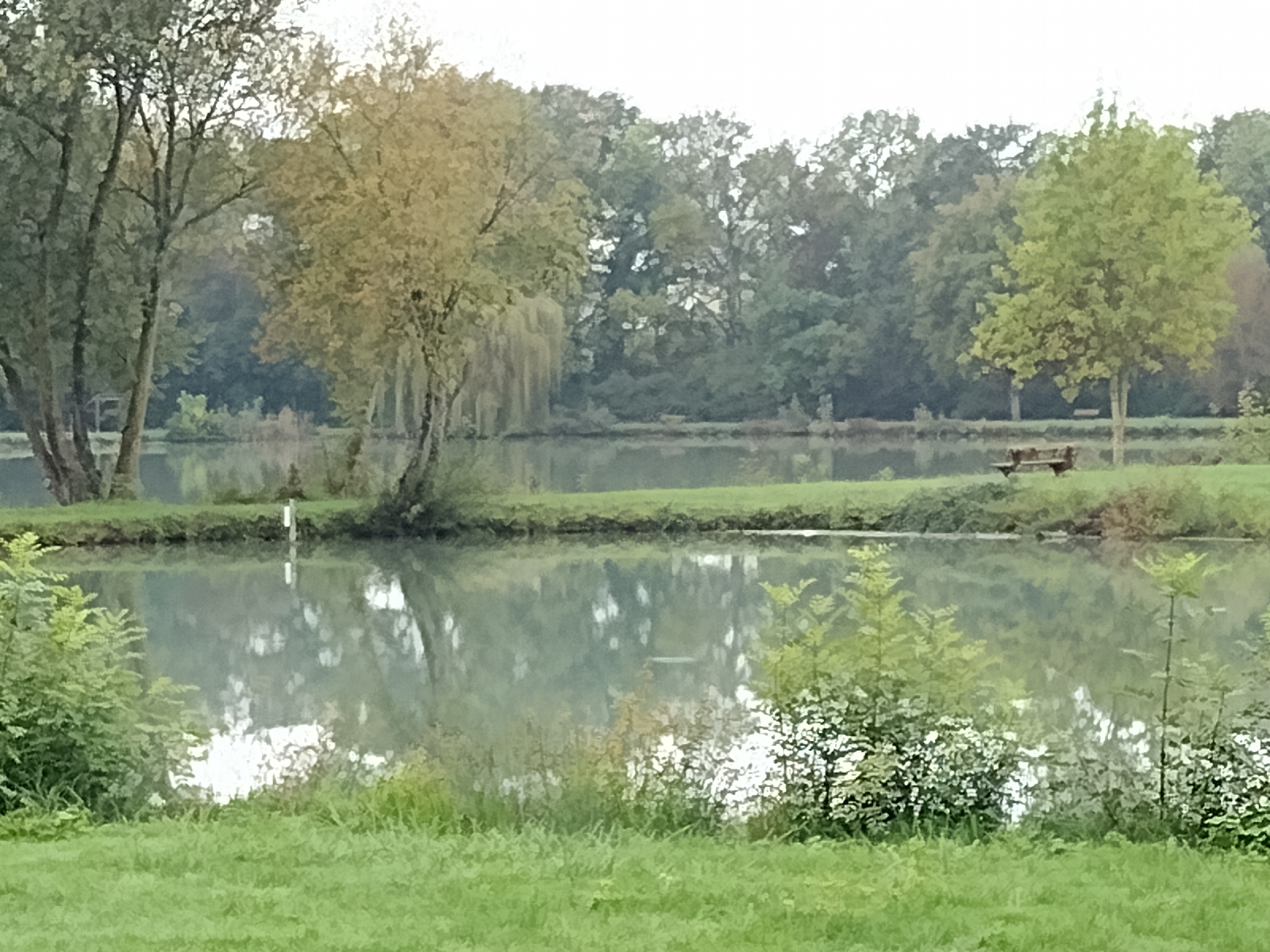 We then had a look round the church - it did smell of incense, but I don't know whether there had been a service that morning - from the literature, it looked as though they only had one service a month and the other Sundays were at other churches. It was a pleasant enough building, but not especially memorable. 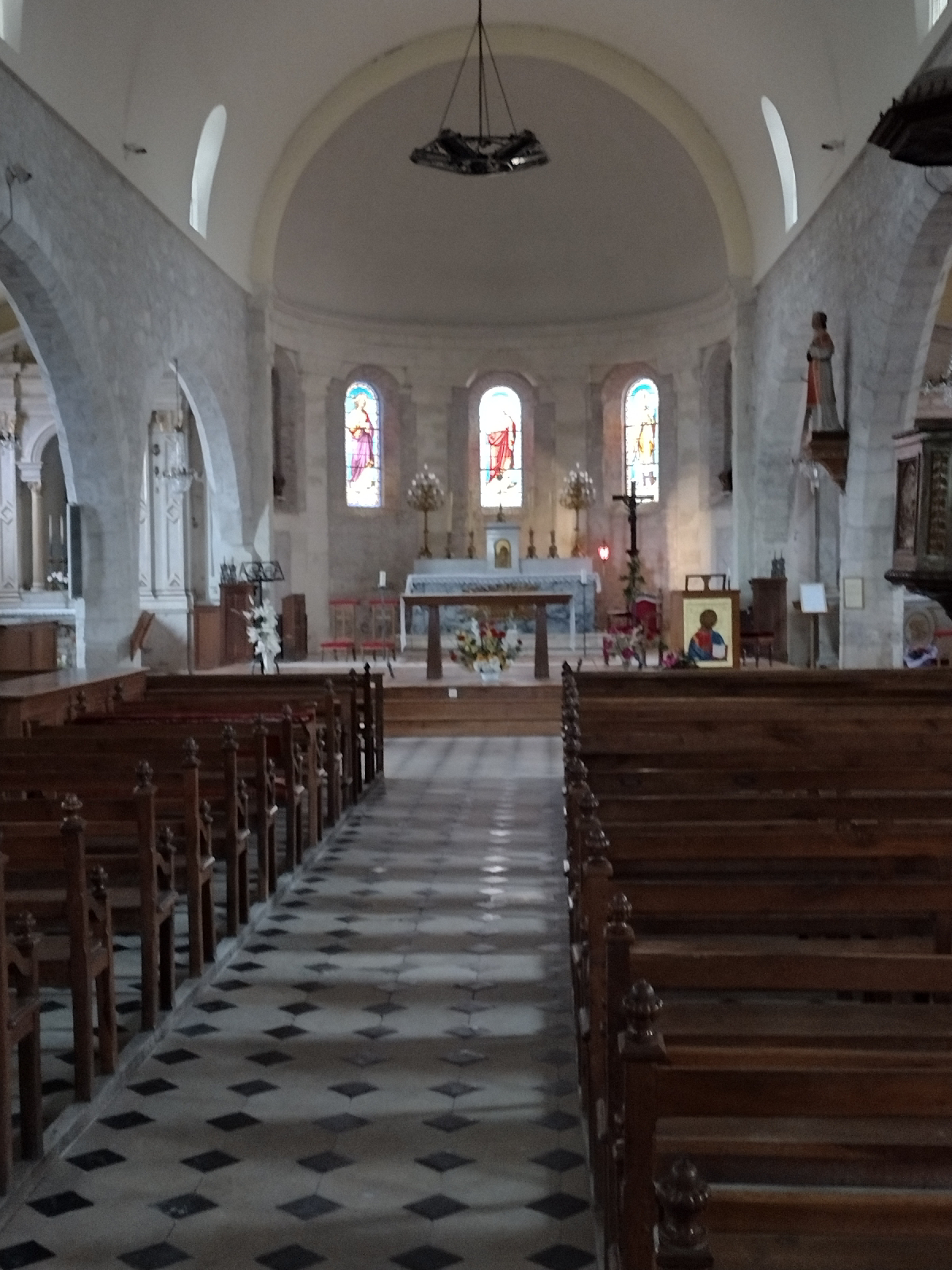 Then it was time to set off; the Swan Whisperer had thought he knew what way we were going, but had not told the Satnav to avoid toll roads, so we ended up on the motorway. But we came off it shortly before Chartres, and even found a place where we could top up with diesel - only 30 litres, though, but that is enough to get us across the Channel.
We are now parked up in a wonderful, if rather small, free aire which even includes electricity in the village of La Madeleine de Nonancourt, just by the Mairie. It looks as though it was once a private chateau. 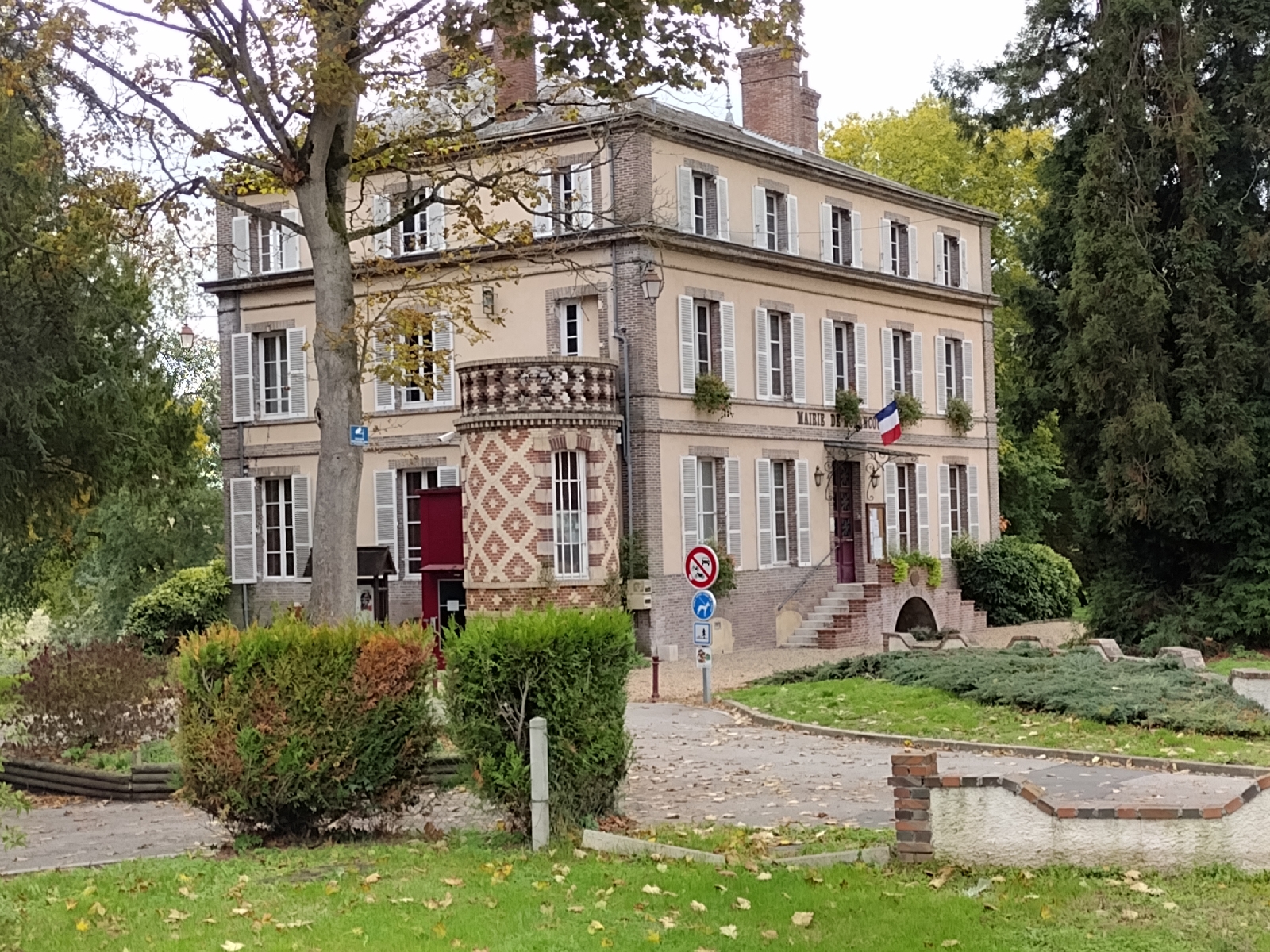 I look forward to exploring in the morning.
The Swan Whisperer did go for a walk, and this evening it was our church's Zoom Bible Study, so supper is rather late!
Posted by Mrs Redboots (Annabel Smyth) at 19:15 No comments:

There was the most glories sunrise this morning. 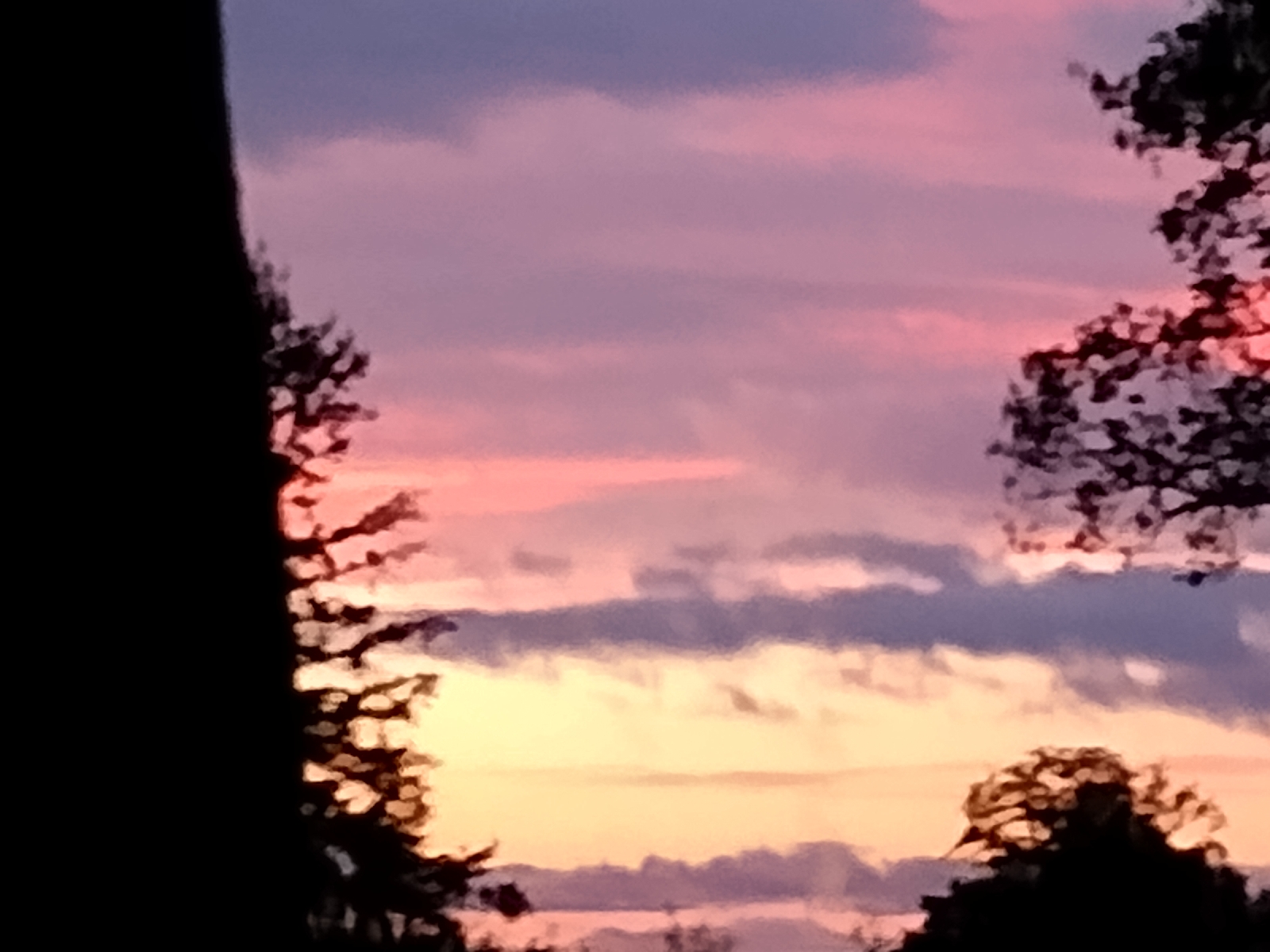 After breakfast we act for a walk round the village, which was very short as St-Macel-en-Mersat is a very small village! The church was nice, though, and obviously cared for, although I don't think it has any source of music unless people bring their instruments. 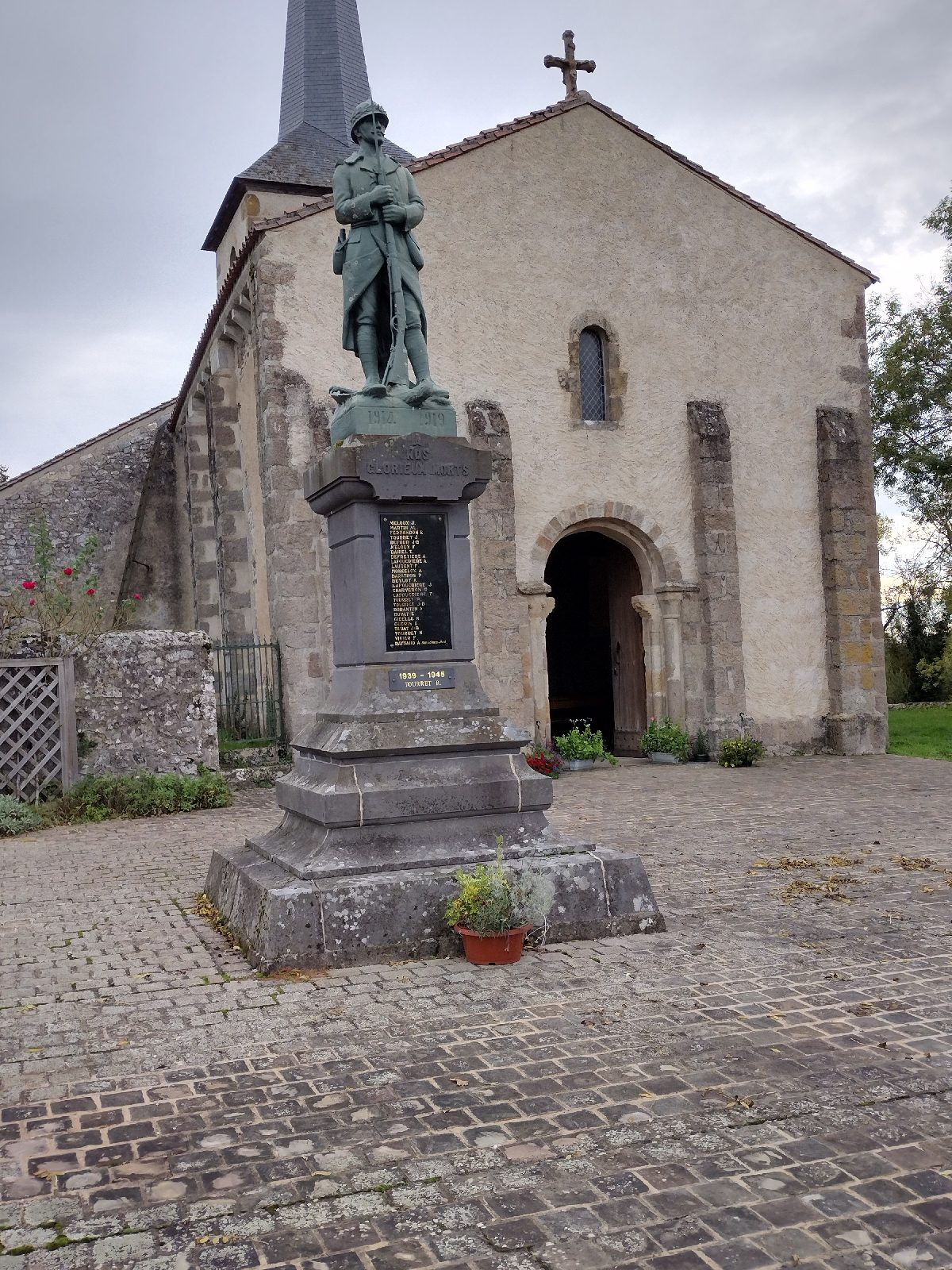 We then set off and, after shopping and a successful attempt to get diesel, drove up the A71, stopping for lunch in a serious cloudburst, but it did stop raining shortly after we set off again. We are now in a very nice Camping-Car park at Lailly-en-Val, with a community sports ground - people were playing boules when we arrived - a fake and a church. Hope it will be fine for exploring tomorrow. Posted by Mrs Redboots (Annabel Smyth) at 18:51 No comments:

A quiet day today; we spent most of the morning just relaxing. My insides are all better now, you will be pleased to hear! Eventually we moved on and drove to a Super U some miles further north, where I did a shopping, and then to a service area to have lunch.
After lunch, I think we came off the motorway and drove a scenic route through the Auvergne volcanoes, but as I was fast asleep at the time, it was wasted on me. Then we arrived at this aire at Saint-Marcel-en-Murat. We stayed here before, back in January 2017, when there was a bitter frost and our pipes froze! Tonight it is very windy and the odd shower, but no danger of frost! I hope we may get a walk round the village in the morning, if the weather co-operates. No photos today, so here is a shot of what Google lens tells me is baby sage that I took at Alès a few days ago. Posted by Mrs Redboots (Annabel Smyth) at 20:01 No comments: